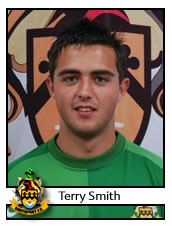 Terry is a young keeper who came through the ranks at Boundary Park, making his Latics debut in a League Cup tie in August 2006 before keeping a clean sheet against Carlisle in his league debut the following week.

Loaned to Southport later in the season he made 10 appearances on loan before making the move to Haig Avenue permanent. Unable to break into the Sandgrounders team on a regular basis he joined Ashton in the summer of 2008 to compete for the keepers jersey.
Season: 2007/2008 [Back to Player Stats]
The player made an appearance in the following games: