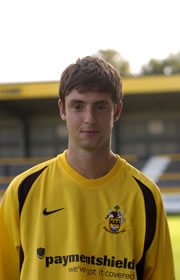 Chris has enjoyed a highly successful time with the Sandgrounders having joined from Oldham Athletic. Primarily a right-back, his quality is highlighted by a versatility which has enabled him to deputise faultlessly in the centre and on the left of the defence. After joining Oldham’s Centre of Excellence, Chris, 21, was part of a successful youth team at Boundary Park, before spending two years on a professional contract. A solid defender who can provide support down the right flank, he has also weighed in with three goals.

The club's official website has confirmed today that manager Alan Wright has agreed to release long serving defender Chris Lever. Lever played 247 games for the club since signing as a nineteen year old for manager Peter Davenport. He also contributed 19 goals during his time, the last of which was