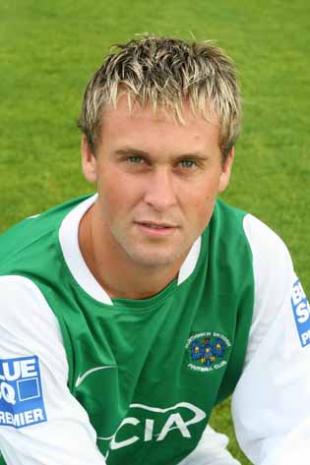 Born in Oswaldtwistle, Lancashire, Byrom started his career at Blackburn Rovers' centre of excellence after being spotted playing for local junior side Oswaldtwistle United at the age of 14. He progressed through the youth system at Ewood Park, and captained the under-17 side, before graduating into the reserve squad after impressing in the FA Youth Cup in 2004. However, he failed to break into the first-team and was subsequently released in 2006.

He signed for League Two outfit Accrington Stanley before the start of the 2006-07 season, after impressing manager John Coleman whilst on trial. He made his debut for the Lancashire side in a 1-1 draw against Carlisle United in the Football League Trophy in October 2006. However, Byrom found it difficult to break into the first-team, making one further appearance for Stanley, featuring as a substitute in a 3-3 draw with Shrewsbury Town. He was subsequently released in January 2007, after being deemed surplus to requirements at the Crown Ground.

Shortly after, Byrom joined Northern Premier League First Division side Clitheroe on a short-term contract. He finished the 2006-07 season top scorer with 11 league goals, including a hat-trick against Kidsgrove Athletic. However, Byrom's Clitheroe contract expired and Conference North side Southport took him on non-contract terms for the start of the 2007–08 season where he scored two goals in two games. Despite being offered a contract by Southport, Byrom opted to re-join Clitheroe.

In the first half of the 2007–08 season, Byrom scored nine goals in all competitions for Clitheroe, which caught the attention of Conference National team Northwich Victoria. He played his last game for the Northern Premier League club in a 3–3 draw with local rivals Rossendale United, a game in which he captained the side for the first time. In January 2008, Dino Maamria announced the signing of Byrom for an undisclosed fee believed to be around four figures. He made a scoring debut for Northwich in a 2-1 defeat against Aldershot Town at Victoria Stadium. He played in a further 20 games in the same season, scoring five times, as Northwich successfully avoided relegation to the Conference North.

The following season, Byrom played a total of 28 games, despite suffering a knee injury keeping him out for the best part of four months. He scored a hat-trick for Northwich against Rushden and Diamonds in a 4-2 victory in March 2008, although could not prevent the Vics relegation from the Conference National in April 2009. In May 2009, Byrom signed for Stevenage Borough for a fee of Ł15,000. He made his debut for the Hertfordshire side in a 1-1 draw at home to Tamworth in the opening game of the 2009–10 season, but was sent-off in the 90th minute for a second bookable offence