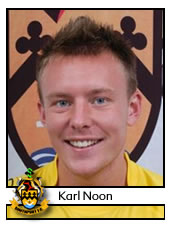 The striker from Liverpool spent two years with Tranmere Rovers before joining Liverpool FC where he was an academy regular and was a member of the team which won the Liverpool Senior Cup in 2004. Karl has also played for Chester City at reserve and U-18 levels, Prescot Cables, Bamber Bridge and Marine before joining Southport.