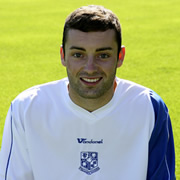 Danny Holmes is a second year professional at Tranmere Rovers who has been a regular in the Reserves for the last three seasons.

The youngster can play right back or centre back and signed a one-year deal in July 2007 which was extended a year later.

He went on a month long loan to Southport in December 2007.

Holmes made his first team debut at Yeovil Town in November 2008.
Season: 2007/2008 [Back to Player Stats]
The player made an appearance in the following games: