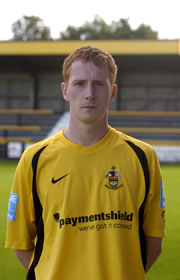 Few players in Non-League football are developing a reputation faster than Ciaran. Three years ago he was turning out for struggling Radcliffe Borough, but after two goal-filled seasons at Burscough, the 24-year old is now a force to be reckoned with. After stints at Exeter City and Mossley, the former Manchester City trainee joined Burscough from Ashton United. As well as scoring with great consistency, he has produced high quality goals, netting 20 times to fire the Linnets to promotion in 2007, before finishing joint top marksman in his first season in the Conference North.
Season: 2008/2009 [Back to Player Stats]
The player made an appearance in the following games:

Eye for goal: Ciaran Kilheeney Published Date: 28 November 2009 By Tony Dewhurst Like many a precocious schoolboy, Ciaran Kilheeney found that more than talent was required to succeed as a professional. He could have dropped out, disillusioned with life when Manchester City freed him nearly eight years ago and when Kilheeney's football career