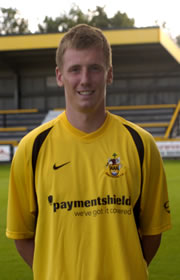 Ormskirk-born Shaun arrived at Haig Avenue in July 2008 after a fleeting stay at Burscough. He signed for the Linnets after coming to the attention of manager Liam Watson, who was impressed by the significant contribution of the 21-year old in Fleetwood Towns Northern Premier League title win in the 2007/2008 season. A left-back who also has experience in the centre of the defence, Shaun moved to Fleetwood in January 2007 after a handful of appearances in the Conference Premier with Morecambe after two years in the youth ranks at Christie Park.
Season: 2010/2011 [Back to Player Stats]
The player made an appearance in the following games: