We are saddened to learn today of the death of former player-manager Paul Futcher, aged 60 following a short battle with Cancer.

Between 1997 and 1999 ‘Futch’ took charge of 145 games including a never to be forgotten trip to Wembley stadium for the FA Trophy Final in 1998. He featured as a player 73 times, his last for the club being in April 1999 in the Liverpool Senior Cup Semi Final win over Tranmere Rovers.

In football there are very few famous twins, and not many as successful as the Futcher brothers. As an uncompromising centre-half (his brother Ron was a striker), Paul was once the most expensive defender in English football, signing for Manchester City for £350,000 in 1978.
Futchenstein, as he later became known, began his career as an apprentice at his hometown club Chester City in 1973 before a £100,000 move to Luton as a 17 year old. Having made 21 appearances for City, he went on to make over 140 for the Hatters in just over four seasons, with 10 England Under 21 appearances also to his name.
After spending 2 years in the top flight with Manchester City, he signed for second division Oldham Athletic for £100,000 in August 1980 and spent 3 years with the latics in Division two before moving to Derby County and then onto Barnsley. His time at Barnsley became the longest spell at one club in his career, playing a part in 7 seasons of football with the Yorkshire side.
At age 34 one could have been forgiven for thinking that he was coming to the end of his career and after spending the early part of 1990 languishing in Halifax Town’s reserve side, it certainly looked that way. Alan Buckley however was to breath fresh life into his career, signing him for Grimsby Town. An astute signing it turned out to be, Originally intended to be a short term replacement for Andy Tillson, he became a firm fans favourite and twice became player of the year during a successful 5 season stint.
He was one of the oldest professionals in the football league, but professional was exactly the right way to describe him.
Futcher eventually turned to management in 1995. A very short spell as player/manager at Darlington was followed by a 2 year stint as boss of Gresley Rovers, with whom he went on to win the Dr Martens Premier League title. With ground grading an issue, Gresley were unable to take their place in the Conference and Futcher moved to Haig Avenue.
An intelligent footballer, Futcher had remarkably continued playing at Gresley. What he lacked in pace, he made up for with the incredible ability to read a game and rarely missed a tackle. Manager-less going into the start of the 1997-98 season the signing of Futcher turned out to be a good piece of business by the Sandgrounders. In signing Futcher as full-time manager of the club, they were also getting what would turn out to be one of the best central defenders in the non-league history of the club, arguably only eclipsed by the replacements that he himself helped to develop. Paul played until the age of 42 before finally hanging up his boots.
During his two and a half year spell with the Sandgrounders, Futcher’s laid back management style was often a topic of debate amongst the Southport supporters. Following years of animation from the touchline with Kettle and later Messrs Ayre and Moore, Futcher’s style was in stark contrast. Leaning on the side of the dugout, Futcher left his encouragement and team talk to the dressing room, leaving his players and his inspirational captain Brian Butler to fight their own battles and orchestrate proceedings on the pitch.
On a personal level, the Wembley appearance meant more to Futcher than most of the players, for at the age of 41 he was to become the oldest player to appear in a cup final beneath the twin towers.
The expected up turn in league fortunes following the FA Trophy Final in May 1998 disappointingly never came, and the remainder of his time was spent successfully fighting off relegation.
Futcher’s incredible eye for talent saw the Sandgrounders sign some of their greatest non-league players so it was no surprise that following his exit from Haig Avenue in 1999 he began working at Leeds’ centre of excellence. Futcher had left the Sandgrounders with a talented and hungry squad and he had been instrumental in developing the careers of his playing replacements Scott Guyett, Phil Bolland and Tim Ryan, all of whom who went on to live their dream of playing in the Football League. Futcher was also responsible for the signing of a certain Mr Steve Dickinson who went on to make nearly 300 appearances for the club before returning to Guiseley in 2006.
Futcher returned to management with Stalybridge Celtic in 2001 but quickly found that despite their impressive return to the Conference from the Unibond League, only 7 or 8 players remained from the title winning squad. Former Celtic manager Phil Wilson had ironically left the Stalybridge hotseat to replace Mark Wright at Haig Avenue that summer and as was his style, had taken many of his squad with him. Rooted to the bottom of the table with just 1 win from their opening 12 games, Futcher struggled to keep the newcomers in the division and was relieved of duty before the inevitable happened.
Ashton United were next to call on the services of Futcher, but he lasted just 10 months before being replaced in December 2005.
Futcher stepped away from management and once again returned to player development, working with the male and female academy sides at Huddersfield New College, from where he helped to launch the career of striker Cameron Jerome, whose younger brother Jerome has just signed for…..Southport. 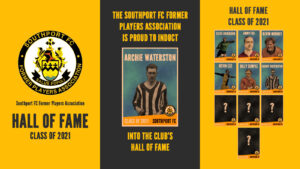