Skip to content
You are here
Home > Personalities > Sam Shrouder 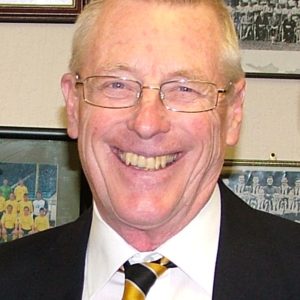 Vice Chairman and a close friend of Charlie Clapham. A supporter for over fifty years. Sam was brought up in Aughton, Ormskirk and recalls it was the 1954/55 season when he saw his first Southport game. Sam has been involved at the club for over twenty years. Initially wrote to Charlie Clapham when Micky Taylor left for Fleetwood to see if there was anything he could do to help having seen we were short of players. Charlie initially failed to respond to his letter but Sam’s perseverance saw him pen a further, stronger letter to which Charlie immediately picked up the phone, they talked and have been the best of friends from that moment on. Sam was Chief Executive of Apollo Leisure who sponsored the club for a number of years. On the field Sam recalls his most memorable Southport game as the ‘windy night’ against Gainsborough when just 77 people turned up. Sam had driven up from Oxford in some of the most horrific conditions he can remember with roads closed and trees blocking the way, he was amazed but thankful when the game went ahead. If that doesn’t demonstrate his commitment to the club, A Northern Premier League Cup Tie on a cold and windy February night in 1988, then nothing does. Sam ranks David Eyres as the best player he has seen in the non league days and only wishes he could have played more times for the Sandgrounders. He can vividly remember Eyres wonderful goal in a game against Chorley which although we lost 2-3, the goal was good enough to illuminate any match. Sam’s lowest point, along with most older Southport fans was the day we failed to gain re-election to the Football League in 1978 but also recalls the relegation day at Stevenage as another low point.