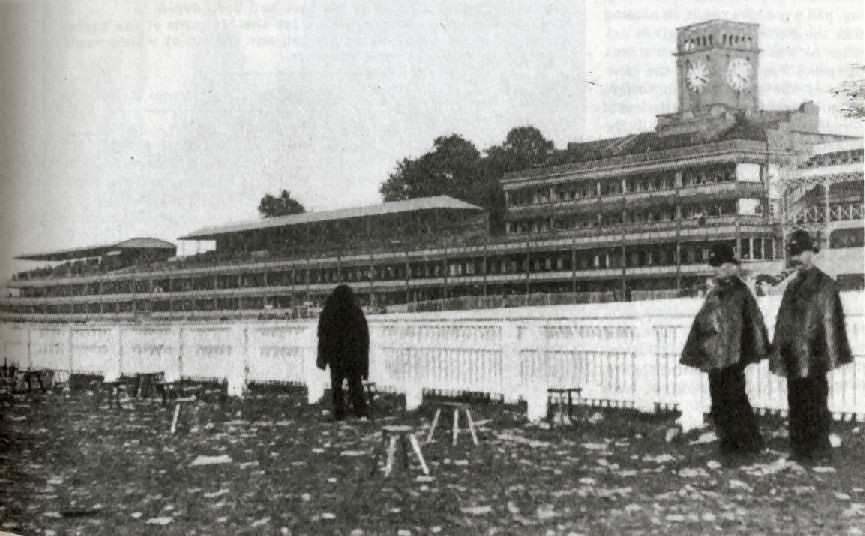 Walter Holbem started his football career with an amateur team, Healey Friends, near to his birthplace Sheffield. He joined Sheffield Wednesday in 1905 for £10. After a slow start with Wednesday he went on to make 89 appearances over a five year period before being sold to Everton for £500.

Walter made 18 appearances for Everton over the next two seasons but his time at Goodison Park was cut short due to a series of injuries.

In an attempt to rescue his career he tried a move to Scotland with St Mirren, however his wife failed to settle and he returned to England shortly after, where he signed for Preston North End.

His spell at Preston was again short lived and by September 1915 he had moved to Southport Central where he was to become a regular in the 1915/16 season.

His refusal to sign up and join the war-effort left him in hot water. Having received three notices to report and having failed to attend any, the Southport police paid a visit to his wife. In order to save his wife from any further trouble Holbem voluntarily attended the police station and handed himself in from where he was charged under the Military Services Act with being an absentee from the British Army.

Still on the books at Ash Lane, Holbem made his final appearance for Southport in April 1917.
After he left the game Walter became a racecourse bookmaker and it was as a result of this that Walter met his death.

Walter was killed by lightning on while holding an umbrella in the Tattersall’s Ring at Royal Ascot. The strike not only destroyed his umbrella but the bolt struck him in the throat causing him to collapse to the floor unconscious. Although rushed to hospital he died later the same day.

Earlier in the day one of the stands had been struck and damaged but by the early afternoon, as spectators arrived for the meeting, only light rain fell. Then after two races a thunderstorm began and Walter Holbem was struck by lightning. The accompanying torrential rain then flooded the course causing the racing programme to be abandoned for the rest of the day.

Yesterday’s Ascot programme had to be abandoned for the first time in its long history after only two races-the Coronation Stakes and the Royal Hunt Cup had been run. The course was flooded by torrential rains, which were accompanied by vivid lightning and terrific thunder. So heavy was the rain that at times it was impossible to
see more than a few yards ahead. A man named Holbem, from Southport, was struck and killed by lightning while standing under an umbrella in Tattersalls’ Ring. It is believed that there were no other casualties, but thousands of people were drenched to the skin, and dresses worth thousands of pounds were ruined. There had been a thunderstorm in the early hours of the morning when the roof of one of the stands was struck, and rain was falling lightly when most of the guests were arriving before the afternoon’s racing was due to begin. There was then a fine interval ; but while the runners for the Royal Hunt Cup were going down to the start, and
even before, rain was falling, but no one then could have dreamed of the severity of the storm which was to follow. It was not until the race for the Royal Hunt Cup was over and the horses had returned to the Paddock, and three of them, The MacNab, the winner, and the two placed horses, Grand Idol and Lionhearted, had gone
into the unsaddling enclosures, that the storm’s full fury was let loose. A flash of lightning was followed immediately by loud thunder. Every one who had not before got under shelter now made for cover, if he could. The few trees in the Paddock and on the Lawn quickly had many people under their branches. The visitors out
on the course sheltered as best they might under umbrellas, coaches, and along the sides of motor-cars, and other carriages. They were soon soaked through. At least one Club tent, out on the far side of the course, threw open its doors to the people round about.

LAKES ON COURSE The storm never seemed to move. The rain came down straight. The intervals between the flashes were very short; sometimes the lightning and thunder were simultaneous, or seemed to be. Yet for some time nothing and nobody seemed to have been struck. Then came the most vivid flash of all, with a terrific crash of thunder, and a man standing in Tattersalls’ Ring was seen to fall. The police were beside him at once, and an ambulance was signaled for, but the signal was quickly cancelled and the man carried out. It was said that other people felt shocks. In time a slight breeze began to blow, the storm shifted, and the rain stopped. Through it all the police on duty stood to their posts admirably, wet through as they were in their capes. When the storm had abated an Ascot was seen such as no one had ever seen before. Large lakes were out on the course, notably at the junction of the courses and just beyond the Winning Post. Smaller pools stood in other places, and everywhere the water came above the walkers’ ankles. There was another lake in the Paddock, which was almost all under water. There were lakes on the Lawns and a lagoon by the new archway leading from the Paddock to the West Car Enclosure. Nevertheless, one man had stood out in it all, in the Paddock, with his umbrella up, fascinated by the sight which, it is to be hoped, he will never see again, while the water ran over and into his shoes. He remained so motionless that it was feared that he had been struck by lightning; but when the rain was over he went off, wetter, if possible, than any one. Then one by one, and two by two, and later in crowds out came the visitors. Some who had been lucky were almost dry ; others were partly dry ; others thoroughly wet. The new long dresses might now have been a hindrance, but the wearers had not worn short dresses for nothing. Up went the skirts until they were shorter than ever before. Some had been ruined, but others might be saved with care in the walk to the motor-cars and trains. Not a few were ruined on the way. Shoes and stockings availed not for the rest of the meeting, so much water was there in the Paddock and on the Lawn; indeed, in most places it was inches deep. And there was still the great lake in the Paddock to be crossed by those who would reach the West Enclosure. Chairs were brought. out and a bridge was built. It would have passed no professional test, but it was better than nothing until one was half way across and the lady in front was not too certain. To hesitate was to be lost and nearly drowned; and many hesitated. As the chair legs sank in the mud there were many falls and many more dresses ruined. Even when this bridge had been crossed there was another just outside the archway into the car enclosures; it was made of little wooden boxes, none too safe. This second bridge passed, there were no dry feet, no dirty or unspotted stockings, and very few unspoilt dresses. The Stewards could not but advise the King that the rest of the programme would have to be abandoned for the dav. It. was decided that the Chesham Stakes and the King Edward VII. Stakes should be run on Friday, thus making nine races for that afternoon, and that the Churchill Stakes, the Bessborough Stakes, and the Fern Hill
Stakes should be added to, this afternoon’s programme, which will now consist of 10 events. To-day racing will begin at 1 o’clock and will continue with only half-hour intervals until half-past 5, when the last race of the day, the Ribblesdale Stakes, will be run. The fiull programme will be found on page 6, together with our Racing
Correspondent’s comments on it and on yesterday’s racing. The Southern Railway Company announce that in view of the earlier start at Ascot today and to-morrow, an additional luncheon car express will be run from Waterloo on both days at 11.48 a.m.”

DEATH BY LIGHTNING AT ASCOT

At the inquest at Ascot last night on the body of WALTER HOLBEM, of Ribble Avenue, Southport, a bookmaker who was killed by lightning on Wednesday while standing in the Tattersalls, Ring, it was stated that there were no witnesses to the actual occurrence. Dr W.H. Brown of St Mary’s Hospital, London who was on duty behind the grandstand said that Holbem, was gasping for breath when he was brought in, and died almost immediately. His condition was consistent with his having been struck by lightning. The only mark on his body was an abrasion of the skin on his Adam’s apple. Samuel McClarence, who was employed by Holbem, said that he ran for shelter from the rain leaving Holbem standng under his umbrella. Two minutes afterwards he saw him being carried away. A verdict of “Accidental death” was returned.

WALTER HOLBEM;
The death through lightning of Walter Holbem, the Everton, Sheffield Wednesday, Preston, and Southport player, came as a shock to those who remembered a buoyant, breezy young man, stout of chest and a trifle tousy in a tackle.  Holblem played for Everton for two or three seasons, and afterwards I met him in Scotland, where he joined the Patrick club.  Our next meeting was in central Station, Glasgow, when he going to Ayr Races and I was going to Hampden Park.  Money did not spoil Walter.  In fact, as the years rolled on, he become mellowed.

BOOKMAKER TRAGEDY UNNOTICED
King and Queen Give £25 to Fund for Widow
The inquest was held at Ascot last night on Walter Holbem, of Ribble Avenue, Southport, a bookmaker, who was killed by lightning on Wednesday when standing in Tattersall’s Ring. It was stated that there were no witnesses of the actual occurrence. Dr. W.H. Brown, of St. Mary’s Hospital, London, who was on duty at the first aid room, behind the grand stand, said that Holbein was gasping for beanth when brought in and died almost immediately. His condition was consistent with his having been struck by lightning. The only mark on his body was an abrasion of the skin on the Adam’s apple. There were no signs of burning on the clothes. Samuel McClarence, who was employed by Holbein said that he ran for shelter from the rain, leaving Holdein standing under the umbrella. Two minutes afterwards he saw him being carried away.
Accidental Death
A verdict of accidental death, was returned. The King and Queen have headed the collection organised by the bookmakers on behalf of the widow and children of Holbein with a joint subscription of £25. Tithe first collection was made in Tattersall’s Ring yesterday and will be continued in the cheaper ring today. 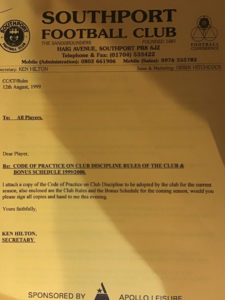 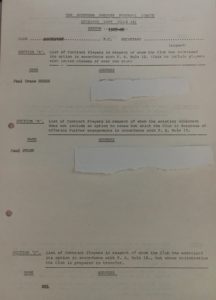