Skip to content
You are here
Home > Profile > Tom Maley 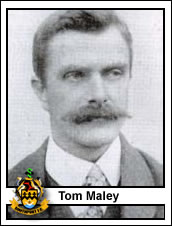 Thomas E. Maley, who was born in Portsmouth on November 8th, 1864, came from a famous footballing family. His brother Alex was, in turn, manager of Crystal Palace and Hibernian while his brother Willie won three Scottish League championship medals and one Cup winner’s medal with Celtic, besides being Celtic’s manager from 1897 to 1940. Tom played alongside his brother Willie at Celtic and also appeared for Partick Thistle and Third Lanark. He was Secretary-Manager of Manchester City from August 1904 to June 4th, 1906 when he was suspended sine die after an enquiry into illegal payments. He had taken City to the Second Division
championship in 1903 and an F.A. Cup victory the following season as well as to the runners-up spot in the First Division.
In 1911 the F.A. lifted Maley’s suspension and on February 25th that year he became manager of Bradford Park Avenue; he brought a large contingent of Scottish players with him, nine playing on February 24th, 1912. He took Bradford to promotion to the First Division whence, after the war, they were relegated in successive seasons to Division Three (North).
He was appointed manager of Southport in May 1925 but remained at Haig Avenue for only five months before severing his connection on October 31st, it was officially stated by the club that there was no friction on either side. A school teacher by profession, he had been appointed Headmaster of St. Mary’s Roman Catholic School in Glasgow in August 1906 following his suspension. He died on August 24th, 1935.
Profile reproduced with Permission from:
The Sandgrounders: The Complete League History of Southport F. C., by Michael Braham and Geoff Wilde (Palatine Books, 1995). ISBN 978-1-874181-14-9

The death occurred in Glasgow at the weekend of Mr Tom Maley, a well-known player and football administrator in his day, and brother of Mr Wm. Maley, Celtic F.C., and Mr Alec Maley, formerly of Hibernians and Clyde.

Mr Maley who was 71 years of age, was a keen amateur footballer in his younger days, and played for Partick Thistle, Dundee Harp, Hibernians, Third Lanark, and Celtic. A school teacher by profession he became governor of Slatefield Industrial School, later leaving that post to become manager of Manchester City F.C. Under his guidance the club prospered, and many famous players were recruited to the team.

His engagement ended with the wholesale suspension of club officials and players over the payment and acceptance of excessive bonus money, but some years later that ban was lifted in his case and Mr Maley became manager of Bradford Park Avenue Club. Later he was associated with Southport F.C prior to:his retirement.