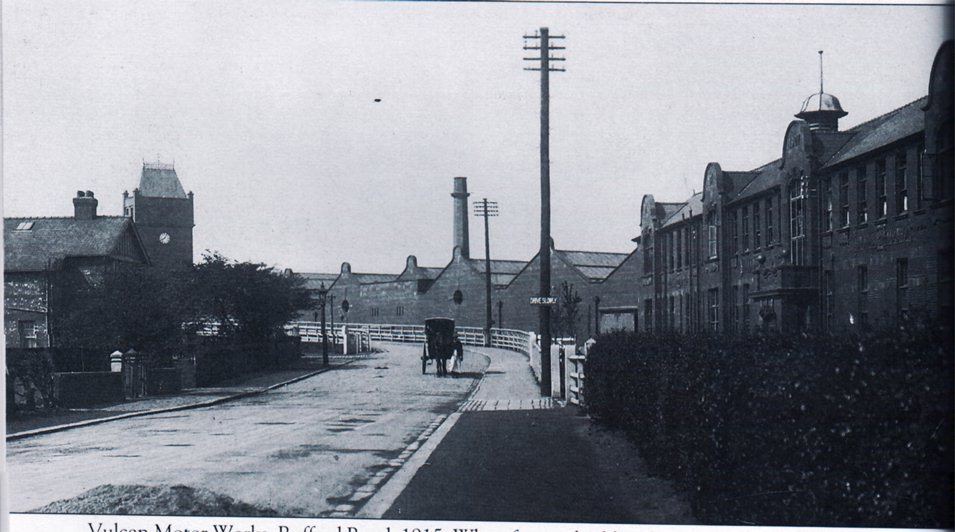 The Vulcan Motor Works in Crossens

It’s now quite widely known that for a short period Southport played under the guise of”Southport Vulcan” but many people still ask the question of what happened to the Vulcan name and why it was dropped.

The following information was first published over a series of  match day programmes in the mid 1980s and was penned by Michael Braham.

“In 1918 the football club was taken over by the Mayor Councillor Hampson who was a pioneer of the motor industry having built up the Vulcan Motor Company in Crossens. In effect the club was taken over and financed by the Vulcan Motor Company on the condition that it was called ‘Southport Vulcan’. A committee was formed with F.S.  Marsh as chairman and Councillor Edwin Clayton continued as secretary, The league was purchased from the Scarisbrick Estates and with many brilliant players working in the munitions at the Vulcan Works, optimism ran high.

Southport Vulcan were a fine team and it was generally accepted that the half back line of C. Roberts or Holdsworth, Fay and Abram was the best in the district. Vulcan finished sixth and proved themselves to be one of the best sides in the North. Sid Bowser, who afterwards won English International Honours, played at inside left and he was partnered by the former Preston North End amateur international George Barlow. Bert Rigsby, later to play during the early Northern Section days, also joined Southport. In defence were Crump, a left back from West Bromwich Albion and C. Roberts, a strong wide half from Bristol Rovers. The season was only a month old when a tricky inside right called Turner arrived from the Birmingham district. 0n the 19th October 1918 a young centre forward, William Thomas Roberts, who was employed in the Vulcan on munitions arrived on the scene. He was regarded by many to be the best Centre forward the club ever had. In his first match against Rochdale he netted two goals. Week after week he cracked in goals, and during a match at Liverpool, he hit the ball with such velocity that it burst. He possessed good ball control and was deadly in front of goal. In December 1918, against Port Vale, he scored all 4 goals. He was on Leicester Fosse‘s retained list and subsequently joined Preston North End in 1919. He continued to be one of the League‘s most prolific goal scorers over the next ten years, also appearing with Burnley and Iottenham Hotspur, and received international honours.

Following the cessation of hostilities Southport Vulcan applied for admission to the Second Division of the Football League at the League’s Annual General Meeting in the Summer of 1919. When this proved unsuccessful the Vulcan gave up the running of the club.

Their application was never likely to succeed as Football League would not allow the club to play under a trade name.

A meeting was held at the Temperence Institute to consider the question of reforming Southport Football Club and the Mayor, Alderman E. Wood, presided. It was decided to reform the club as Southport FC, with a committee of R.J. Bentley, J.H. Preston, H. Watchorn, J.W. Robinson, G.H. Collinge, J. Winterbottom and T. Rimmer representing the Vulcan Motor Company.

On lst July 1920 Southport Vulcan FC were reconstituted and on 17th July were elected to the West Lancashire League. The club entered the Richardson Cup and Lancashire Junior Cup. They played at Warren Road High Park under the Chairmanship of George Green with W.G. Rimmer as Treasurer and M. Simm (Secretary). They appointed Irish International Jack Kirwan, a former Southport Central, Chelsea and Spurs inside-forward, as their coach. The team and officials are pictured in front of a Vulcan motor van. For the first time since the 1890’s Southport had two Town teams.

Then Southport Central FC were members of the Lancashire League whilst North Meols, an amalgamation of Churchtown and High Park, played in the Lancashire Combination from 1891-1893 and then in the Lancashire Alliance but by 1895 they had gone into liquidation and their assets had been sold by public auction.

Other members of the West Lancashire League were Brynn, Coppull Central, Croston, Fleetwood Reserves, Hamilton Central, Lancaster Town Reserves, Leyland Motors, Lytham, Brindle and Adlington. Preston Territorials had hoped to apply for membership but were unable to secure a field. Chorley Motors also applied for membership but their election was objected to by Hamilton Central whose ground was only 100 yards away. The clubs voted against Chorley Motors election but subsequently they were added to the League.

Southport Vulcan had just one season in the West Lancashire League. When Southport Football Club were elected to Division 3 (North) in march 1921 Southport Vulcan announced that they would not continue in Opposition to them and Southport Reserves took Vulcan’s place in the West Lancashire League for the 1921-22 season. Fleetwood Reserves and Adlington withdrew whilst Accrington Stanley Reserves, Horwich Central and Penwortham were elected members.