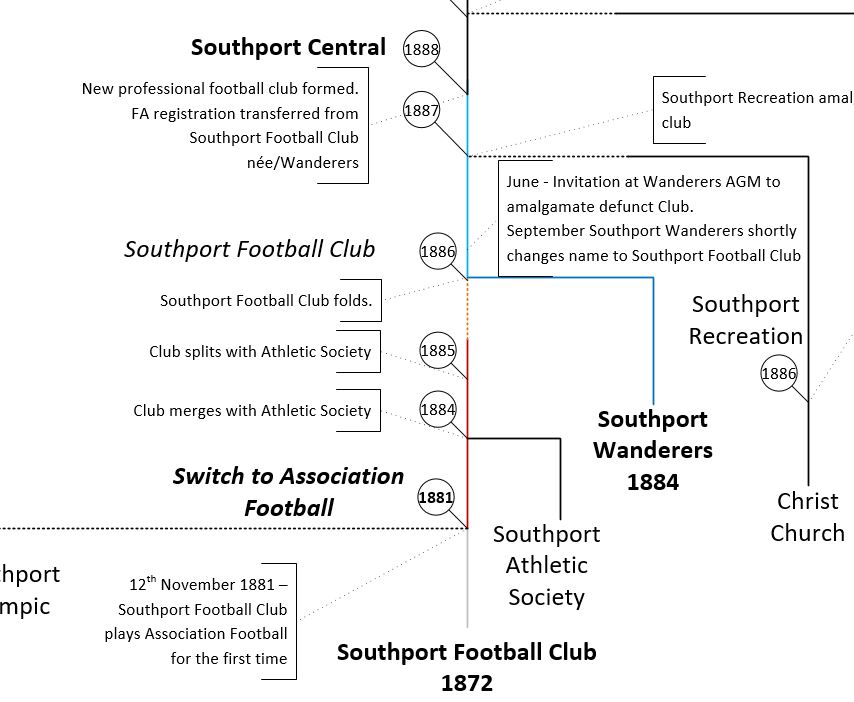 The recent change of the club’s legal name from Pinewise Limited T/A Southport Football Club to Southport Football Club Limited is far from the first name change in our history. We are currently undertaking detailed research into the formative years of the Football Club and through those investigations we are able to bring to life the lineage of the Club. It will probably surprise most people to see just how many name changes there have actually been. This therefore is effectively the history of the “legal entity” in so far as how this relates to the “club”.

Southport Football Club was established as a club in 1872. It was a Rugby club and therefore not affiliated with the Football Association that had been founded 9 years earlier. As is well documented elsewhere this club effectively split into two in 1881; the vast majority of members began to play association football under the same club name and the remainder left to continue playing Rugby Union by joining other local clubs, mainly Southport Olympic and Southport Wasps. Southport Olympic later (1913) became Southport Rugby Union Football Club, a club still playing today from their home on Waterloo Road. They too claim lineage from the same original club as ourselves and will be celebrating their 150th Anniversary next year. Considering our shared history, it should be an anniversary we also mark too!

For the Association players, Southport Football Club was effectively founded in 1881. Following an exhibition match between Blackburn Rovers and Witton (also a Blackburn club) as part of the Athletic Society’s summer sports event, Southport Football Club sought to capitalise on the interest generated by playing competitive football in the 1882/83 season. To do this they had to become members of the FA and therefore in 1882 we became an affiliated club for the first time.

Whilst this club was in no doubt the Town’s premier side, Football still wasn’t a particularly popular sport in Southport and whilst trying to compete with the more senior clubs across the county, financially they struggled. After a disastrously short lived amalgamation with the Southport Athletic Society in 1884, which was severed just a year later, the original club effectively ceased to exist at the end of the 1885/86 season.

At their summer AGM in June 1886, Southport Wanderers, a separate football club with a separate FA registration and themselves founded in 1884, invited the recently defunct club to amalgamate with them. A number of players, and many of the supporters duly transferred their allegiance.
In September of the same year Southport Wanderers changed their name to that of the former defunct club, “Southport Football Club”. As often cited, this club was not the same club in the eyes of the FA who classed them as a more Junior club than the original. Lancashire FA too saw them as an inferior set-up placing them into the Junior county competitions.

In 1888 a new professional club was established in the town with the name of Southport Central Football Club to attempt to pull together, as the name suggests, many of the smaller amateur outfits under a “central” name. As far as we can establish the FA however considered this to be a continuation of the same club as Southport Football Club née/ Wanderers.
Central went from strength to strength as professionalism grew in the game. First discussing the prospect of becoming a limited company in March 1906, the change eventually came 6 years later, and in June 1912 the club was successfully floated for the first time as a Limited Company called “Southport Central Football Club 1912 Limited”.

The club was taken over in 1918 by Councillor T Hampson owner of the Vulcan Motor Company. As confirmed by George Emmison in writing to her majesty’s treasury, whom queried the absence of a set of accounts in 1919, the original Limited Company ceased to trade at the point of the takeover in 1918.

One year later however Vulcan relinquished their control of the club and it was completely reformed and named once again, Southport Football Club, not as a limited company, but this time run by committee.

It was the same “club” once again in the eyes of the FA.

Two years later, and coinciding with a successful application to join the Football League, the club was once again floated as a Limited company.

This limited company, through all its financial ups and downs, remained in place throughout the clubs membership of the Football League.

At an EGM on September 18th 1980 a new board was formed comprising former chairman John Church (elected in his absence), Len Cox and Brian Bennett. Acting on legal advice the new board requested that the FA conduct an investigation into the affairs of the club.
Facing mounting debts the new board decided to take a course of voluntary liquidation of Southport Football Club Limited. Leon Rapport, Cec Rimmer and Billy Bingham comprised a committee to oversee the liquidation.
At a shareholders meeting on 17th December Colin and Deric Hall, partners in a double glazing firm stepped forward with a proposal to save the club from extinction and took control in January 1981. The Halls guaranteed to keep the club going through a new “off the shelf” limited company (a limited company pre-registered at Companies House, but that has never traded, and is ready to be used immediately), Pinewise Limited, which would trade under the name Southport Football Club.

Pinewise Limited did not apply for new FA membership; rather effected a transfer of the FA membership that then belonged to the liquidators of Southport Football Club.

Revised Articles of association were issued a month later.

The new name did not change anything in terms of the clubs legal stature – it was, and still is, the same legal entity established in the 1980s, and as far as the FA are concerned the same “club” that can be traced all the way back through the original Southport Football Club Limited, to Southport Central Football Club 1912 Limited and beyond. 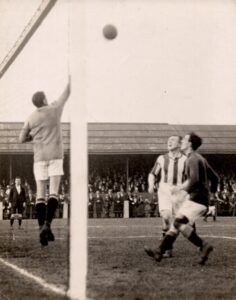