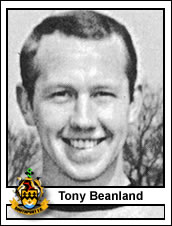 He made his Football League debut when only 18 after being signed by Lem Newcomb on Alan Ball\'s recommendation from Blackpool and, following injury to Bryan Griffiths, was successfully converted to full-back. He later became a constructive hard-tackling wing-half and his 143 League appearances included 89 in succession until he was injured in the Stockport Cup-tie. When only 21 he was appointed the youngest ever first team captain at Haig Avenue. He was reluctantly transferred to Southend United in March 1966 for 5,000 (to finance Jim Fryatt\'s acquisition). After 2 seasons at Wrexham he finished his Football League career with Bradford Park Avenue where he had played as an amateur before signing for Blackpool. His 313th and final League appearance was Bradford\'s last in the Football League. He trained with Southport in the summer of 1970 and might have rejoined but for the arrival of Calloway in the Alex Russell transfer deal, as their styles of play were too similar. He has run several pubs in the Manchester area but has recently returned to Adlington where he plans to remain.