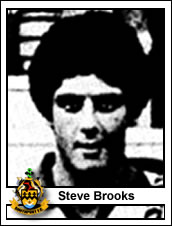 A part-time professional, apart from his spell at Hartlepool, he joined Southport from Marine whose manager Roly Howard predicted a bright future for him. A strong and capable defender he played out all but the last two Football League games after joining Southport, his 65 match consecutive run ending with suspension through the accumulation of 20 penalty points. After Southport failed to be re-elected he was signed by Hartlepool and made a further 63 appearances. He had four and a half seasons at Barrow where he was captain and sweeper before briefly returning to the Football League towards the end of 1984-85 season at Halifax Town. Playing for Morecambe in September 1986 he had a bad accident at South Liverpool, smashing his left elbow. It never healed properly and finished his football career. Even now he cannot bend or straighten his arm fully. He still works as a draughtsman in the Standish area.