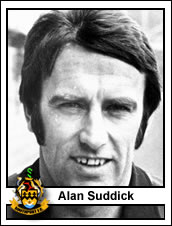 Born in Chester-le-Street, County Durham, at the age of 17 years and 158 days, Suddick became Newcastle United\'s then-youngest-ever player. He was part of the Newcastle team that were Second Division champions and won promotion to the First Division in1964�65. In his time at Newcastle, he played 152 games and scored 43 goals.

On 22 October 1966, Blackpool beat Newcastle 6-0 at Bloomfield Road. Suddick was in the Magpies\' team that day, and so impressed were the home side with his commitment that, two months later, they paid a then-club-record �63,000 for his services.

Suddick made his Blackpool debut on 26 December 1966, in a 4-1 home defeat by West Ham United, and was virtually ever-present from that point on, striking up a partnership with Tommy Hutchison on the left or deep in midfield. Five days after his debut Suddick scored his first goal for the club in a 5-1 win at Southampton.

In 1968-69, he was Blackpool\'s top scorer with twelve goals. He was part of the Blackpool team that won promotion to the First Division in 1969-70.

Suddick scored his 100th League goal, a penalty, in Blackpool\'s 3�0 victory over Preston North End at Bloomfield Road on 23 March 1974. His talent, however, was never truly realised, with his temper sometimes getting the better of him.

He made a total of 348 appearances for the Seasiders, scoring 76 goals.

Such was his popularity at Blackpool that he became known as \"The King of Bloomfield Road\" a title which the fans still affectionately call him. During his time playing for the club Seasiders fans adapted two lines from the traditional English Christmas carol, \"The First Nowell\" to,

Toward the end of his time at Blackpool, Suddick established an unofficial keepie uppie world record, completing three laps and 20 yards of the pitch, keeping the ball off the ground at Bloomfield Road in just under 20 minutes.

In December 1976, he moved to Stoke City and later had spells with Southport and Bury, before joining his final club, Barrow, where he became a part-time player-manager, balancing a role as a hotel manager at the same time.

Suddick played at Under-23 level for England.

After he retired Suddick continued to live in Blackpool, close to Bloomfield Road where he regularly attended Blackpool F.C. matches.
He was inducted into the Hall of Fame at Bloomfield Road, when it was officially opened by former Blackpool player Jimmy Armfield in April 2006.
In December 2008 Suddick revealed that he would be undergoing stem cell replacement therapy in his battle against cancer, at Manchester Royal Infirmary in early 2009. On 18 February 2009 it was revealed that he was critically ill in hospital. He underwent a tracheotomy on 27 February, however his condition deteriorated and three weeks later both his legs were amputated below the knees after he contracted an infection and developed gangrene. His condition worsened again during 15 March and he died in his sleep on 16 March.