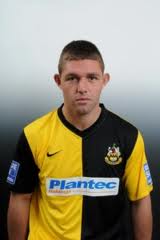 Smith signed his first professional contract with Liverpool in 2005 after coming through from the club's academy. He made his debut and only senior appearance for the club in a League Cup tie against Reading in October 2006 before joining Scottish Football League club Ross County in January 2007 on loan for the remainder of the 2006–07 season, where he made nine league and cup appearances. He joined Stockport County on loan at the beginning of the 2007–08 season[5] and then joined the club on a permanent basis in December 2007 until the end of the season. He made 30 appearances for Stockport County in the 2007–08 season, helping the club to victory over Rochdale in the League Two play-off final in May 2008 and to promotion to League One. He was released after rejecting County's offer of an improved contract.
He signed for Altrincham on 7 November 2008 after a successful trial with the club. On 7 July 2011 James Smith was bought by Southport for an undisclosed fee