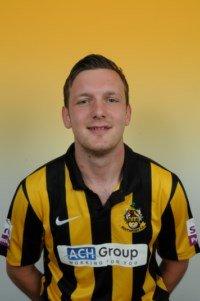 He started his professional career with Oldham Athletic in League One. His contract was cancelled on 2 December 2008 following a breach of discipline.
On 25 March 2009, he joined Macclesfield Town on non-contract terms following a trial with the club.
He joined Scottish club Hibernian in 2009 where he played for the Under-19 team in a central defender role.
He then signed on with Mossley in the summer of 2010. He spent the end of that season on loan at Droylsden before being transfer listed in August 2011.
He was transferred for an undisclosed fee to Woodley Sports a few days later. As part of the deal, Mossley would also receive a percentage of any transfer fee received, should he later leave Woodley. The club was renamed in 2012 as Stockport Sports and on the 1st July 2012 he signed for Southport.