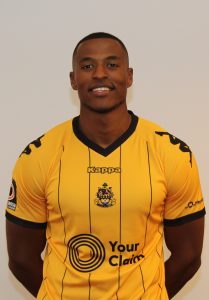 A Portuguese citizen who was born in Angola, Raul played for the Port up front during pre-season in 2019, impressing manager Liam Watson in the friendly games.  The 26-year-old, who moved to England at a young age, is a strong centre forward who has also had time with Guiseley and York City.

Raul earned his move to Blackpool in January 2017 on the back of scoring 11 goals in 22 games for Radcliffe, signing an 18-month contract at Bloomfield Road.

Whilst at Blackpool, he had loan periods in the Vanarama National League before securing a move to Barrow last summer.