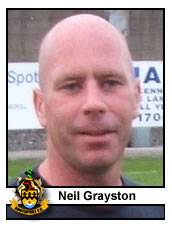 Neil also made 108 appearances with 9 as sub and scored three league goals. Neil played for Bradford City (7 appearances) and Bradford Park Avenue before moving to Haig Avenue, yet another of Paul Futcher�s captures. He describes his most memorable moment as scoring against Hereford United at The Jack Carr end of the ground in a 1-1 draw. Whilst at Southport Neil was a window cleaner and left to be nearer to his home in Halifax. After leaving us he has since played for Halifax, Alfreton, Bradford PA, Droylsden, Guiseley, Bradford PA(again) Goole and Bridlington Town. Enjoyed his time at Haig Avenue and is well remembered for his crazy goal celebration (he didn�t even score the goal) at Havant and Waterlooville in the FA Cup in 2000/01.
Player Profile reproduced with Permission from:
The Complete Non-League History of Southport Football Club 1978 - 2008, by Trust in Yellow (Legends Publishing, 2008). ISBN 978-1-906796-01-3