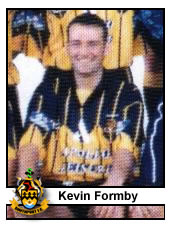 This afternoon we get to meet one of our longer serving players, KEVIN FORMBY, who joined the club at the start of Paul Futcher\\\'s reign just over two years ago. Kevin joined from Rochdale and if you had to single out one moment of his Southport career to date it would be that magical moment when he turned the ball into the net from an ONSIDE position against Slough Town to clinch our place in the F A Umbro Trophy Final at Wembley, our first visit to the Twin Towers in our 117 years\\\' existence.
Kevin has had an excellent start to the new season and suffered a nasty kick in the second half of last Saturday\\\'s game at Hayes, when he could easily have gone on to collect a Man of the Match award, but thankfully he was back in training on Tuesday night and after training he gave us a few minutes of his time to give us an insight into his personal and football life, just before starting work again!
Kevin (he has no middle name) was born and still lives in Ormskirk and is now 28 years old, having celebrated his birthday back on July 22nd. He works for North West Water and is married to Debbie and has one three year old daughter Charlotte. Kevin\\\'s nickname in the dressing room is George - no prizes for guessing why and he currently drives a Vauxhall Astra.
On to matters football, and his best friend in the game is Tony Rigby who moved from Bury to Shrewsbury Town this season. His boyhood hero was Kenny Dalglish, perhaps not too surprising for a Liverpool supporter. Kevin\\\'s favourite player in the game at present is Robbie Fowler mainly because of the way he has come back so well from the tremendous hassles he suffered last season. His favourite football ground though has to be Wembley.where he had the pleasure of taking to the field in the Trophy final in May last year. But a more memorable game for Kevin to play in was at Anfield where he played for Rochdale against Liverpool and although losing to the Reds he loved the experience, especially coming up against the player he lists his most difficult opponent faced - Steve McManaman. Loved it!, that is, except for the moment where he experienced his most embarrassing moment in the game, the ball slipping backwards out of his hands when he took a throw-in no doubt the Kop loved it Kevin! The biggest influence on his career has been Dave Sutton, the manager to took him from Burscough to Rochdale, and his most disappointing moment in the game being released from Spotland. His main ambition in soccer now is to take Southport back into the Football League. He remembers his best goal as the last minute winner at Leek Town a couple of seasons ago, a cracker it was too, although for other reasons the goal against Slough in the Trophy will stick in the memory! The footy match that sticks in his mind more than any other one that he didn\\\'t play in that is, was the England v Germany World Cup semi-final in 1990 where, just for a change, the Germans won in a penalty shoot-out.
Moving away from football. Kevin is very much a family man, and his wife Debbie and daughter Charlotte play a big part in his life. He lists them as the most vital \\\"things\\\" he would need if stranded on a desert island and Charlotte as his pride and joy. When he gets chance to relax he enjoys listening to The Verve, the Wigan band who recorded his favourite piece of music \\\"Sonnet\\\'. His favourite film is \\\"The Sure Shank Redemption\\\" which he recently watched on the coach on one of the long away trips, whilst Al Pacino is his favourite actor. When it comes to watching television - you can\\\'t beat Coronation Street says Kevin! Another of his ways of relaxing is by playing golf and if he gets the chance to escape from these shores then he enjoys a holiday in Marbella. Pasta is the food he likes best and his poison is Bud-Wei-Ser! Smoking is his pet hate and if he won the lottery he would buy a Ferrari, have a darn good night out in Blackpool and he has an ambition to be healthy and happy!