Skip to content
You are here
Home > Author : Daniel Hayes

With thanks to the club for facilitating, this is the first of what we hope to be a series of interviews with former players and members of the former players association. A huge thanks to Ian Baines for agreeing to be the first, and for being so open about his

May is the historical association's "Local History Month" and what better way to kick off and celebrate our local history by sharing a letter written back in 1882 from a father to his daughter with tales from home.... That father in question is our very own Ralph Leather Rylance and it

From it's inception Southport Central's financial position had always been a cause for concern. Indeed by January 1891 the Southport Visiter reported that "the Central club is over £500 in debt, and the committee are making every effort to wipe off the deficit. It is to be hoped the working

Whilst the information we present on this website is correct to the best of our knowledge, we continue to research the early years of our club, and therefore we make no apologies that we make occasional corrections when a discovery is made that challenges previously accepted fact. We find ourselves today

Our research into the history of Southport Football Club stems from our aim to to help supporters new and old to recognise the contribution each and every player, manager, coach or official has made to the club, town and community. Key updates since the turn of the year include: Launch of our

Thomas Blundell Burnett was the secretary of the original Southport FC from their establishment in 1881 until their demise in the summer of 1886, and captain of the side that took to the field against Bootle 'second' in the first association game ever played, on 12th November 1881. We believe

Over the past few days we have spent some time at Duke Street Cemetery attempting to locate the memorials for a number of former players. Ralph Rylance Much has been made of R.L. Rylance’s contribution to establishing association football in Southport. He came to Southport from Blackburn in 1881 where he was 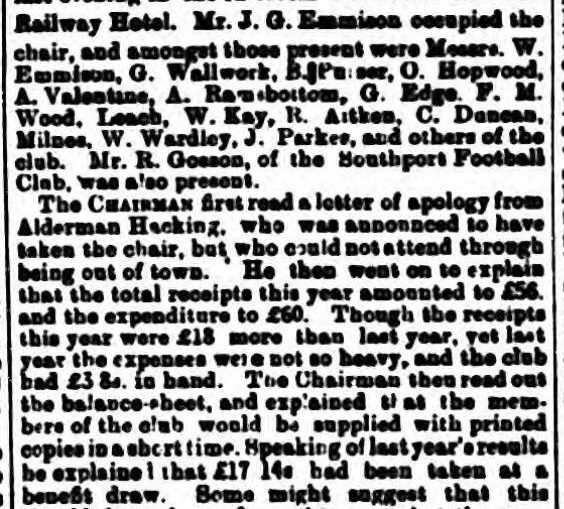 At the Wanderers AGM in June 1886, at which a representative of the Southport club was present, they invited Southport to amalgamate. Thanks to the British Newspaper Archive's digitisation of the Southport Visiter archives a full report of this pivotal event can now be made available to supporters to view.   Images:

The first game played by Southport Wanderers following the "merger" with Southport Football Club at the AGM in June 1886.. Thanks to the British Newspaper Archive's digitisation of the Southport Visiter archives.

A product of Southport and District League football with Ince Blundell he was signed by Billy Bingham - one of a clutch of former Evertonians on the club's books at that time. He replaced Les Barratt and appeared in the last 11 League games in 1965-66. On Boxing Day 1966,

The son of a professional boxer, this fast, direct and courageous left winger had the misfortune to fracture a fibula on his Southport debut. Freed by Leeds United, his best years were at West Brom who signed him from QPR for a £17,000 fee and for whom he made 300 League

After representing Liverpool Schoolboys he played for Cambridge Park in the Southport and District League. Following some promising displays in the Northern Floodlit League side, this young striker was promoted to the League team towards the end of 1969-70 but could not prevent Southport from being relegated. He began 1970-71

A relative of the famous Milburn/Charlton footballing family, Wilf began at Huddersfield Town as an outside right in the central League side but was switched to wing half. He was recommended to Southport by Alfie young, a former Huddersfield Town centre half, and, after making his debut the day after

On this Day: February 9th