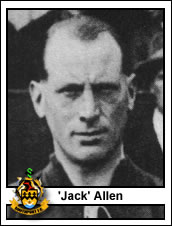 An uncompromising and sturdy full-back who made his footballing debut with Glossop North End in their last season in the Second Division. During the First World War he saw service as a Lieutenant in Italy. In five peace-time seasons with Manchester City he made 55 Football League appearances and had a further 107 Central League games. With City he also won a Lancashire Senior Cup Winners medal in May 1921. His 2 spells at Haig Avenue (where he worked for a time in Edgar Rayner's fish shop) was split by a campaign with Crewe Alexandra. Back in 1916-17 he also made 2 appearances for Southport who were then in the North West War League. On his retirement he worked as an agent for the Royal London Mutual Insurance Company where his football contacts proved invaluable. 'Mad Jack' was a larger-than-life character off the field who compered Police shows and could get whole busloads of people in stitches with laughter. His private life was less happy. Latterly he lived for io years in Southport only moving back to Higher Blackley, Manchester after the death of his second wife a year before he died.

If you can provide any further information please contact me
Season: 1926/1927 [Back to Player Stats]
The player made an appearance in the following games: