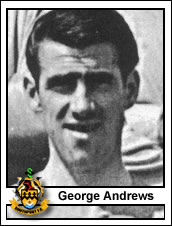 He joined Southport from Cardiff City for a then record fee of Ł6,000. He had actually turned professional seven years earlier with Luton but, being homesick, was unable to settle down. He played in the West Midlands League for Dudley Town and Lower Gornal before being signed by Cardiff City for Ł750. He scored on his 'Bluebirds' debut and in all totalled 21 goals in partnership with Terry Harkin (with whom he also played at Southport and Shrewsbury) and a young John Toshack. Signed by Billy Bingham to replace the departing Jim Fryatt, he was particularly strong in the air, being one of the finest headers of a ball to have played for the club. Despite his casual appearance — bearded and with his shirt inevitably flapping outside his shorts — he was a thoroughly professional striker and will always be remembered at Haig Avenue for his winning goal against Southend which saw the club into Division III. Owing to Southport's perennial financial problems he was transferred to Shrewsbury Town for Ł10,000 where he scored 5o goals in 123 + I games. He ended his League career with Walsall where he made 156 + 3 appearances and scored a further 38 goals. He then spent 10 years in non-League football — his goals return being consistent wherever he played. He works on the parks and gardens for the local council in Tipton, where he still lives.

On this day in 1968 Southport travelled to Billy Bingham's Plymouth Argyle. Since his departure from Haig Avenue in February of the same year this was to be Bingham's biggest defeat. It was the Southport forward line however that took all the headlines as this article from the Liverpool Echo