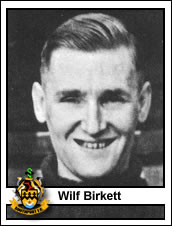 A spectacular and daring goalkeeper, Wilf first played for Southport as a war-time guest, making his debut against Blackburn Rovers on 14 November 1944. At Everton he was kept in the background due to the consistency of Sagar and Burnett. Though dogged by many injuries he often turned out when less than 100% fit and rendered yeoman service even when playing under a handicap. In a war-time match at Liverpool in December he was beaten 12 times despite a brilliant performance and collapsed through sheer exhaustion just before the finish. He was at his best when Southport were really up against it — diving at the forwards' feet and rescuing his side from hopeless situations. His famous stentorian clearance cries — he was rather deaf — made him one of the game's characters. With the arrival of Ray Minshull he was transferred to Shrewsbury Town in 1952 but, though returning for 1953-54, was forced to retire because of a recurrent shoulder injury. He spent four more years at Haig Avenue as assistant trainer and then moved to Wigan Athletic, soon becoming first team trainer. He held this position for 12 years and was employed in the Parks Department of Ashton UDC. When over 40 he came out of retirement in an emergency to help the Latics in an F.A. Cup-tie at Gateshead. An attender at both the 1981 and 1991 club reunions, his health declined over a period of 15 months, but his death came suddenly at home on Christmas Eve, 1993.

Today we head back to 1951 where Carlisle United were the visitors to Haig Avenue. Whilst Southport did secure the win, the game was more significant for the weather. The Liverpool Echo reported that a "waterlogged ground made conditions difficult at Haig Avenue but Southport went mudlarking in great style". Injuries however