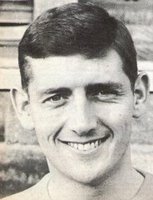 A prolific goalscorer throughout his career, Terry Harkin started out as a youth with Derry City before making his name with Bertie Peacock�s Coleraine. Transferred to Port Vale for a �2,000 fee in September 1962, he managed ten goals in 17 games during his first season in Division Three, as the club finished in third place, just off promotion. It was during his debut season in England that Harkin won his first senior representative honour, leading the line for Northern Ireland�s Under-23 team in a 5-1 defeat by Wales in at the Vetch Field, Swansea, in February 1963. In his second season at Vale Park, Harkin managed only a handful of games, and a single goal.

A close-season �3000 transfer to Crewe in 1964 brought an improvement to Harkin�s League opportunities. He scored 34 times (a seasonal record for a Crewe player) in Division Four, including a four goal in a 6-2 win over Barrow. This form brought the attentions of higher-League clubs, and in August 1965 Cardiff City took Harkin into Division Two. An explosive start to Harkin�s Ninian Park career saw a debut goal in a 2-1 defeat by Derby, and a total of seven in his first eight games, before his form dipped, and goals dried-up. Thereafter Harkin�s first-team opportunities were sporadic, and in September 1966 both club and player decided to cut their losses.

A \"no-nonsense\" striker, strong in the air and possessing a powerful shot with either foot, Harkin found himself back in Division Four with Notts County. An explosive start at Meadow Lane brought Harkin seven goals to mid-November, before his form once again dipped. At the end of 1966/67 Notts County finished just above the re-election positions, and were more than happy to accept a �2,000 bid for Harkin from Southport, newly promoted to Division Two.

At that time, Southport were managed by Billy Bingham, and although he left mid-season to manage Plymouth, he clearly remembered Harkin for the other post he had also taken that season, part-time manager of Northern Ireland. Harkin�s Full international debut came in February 1968, in a 2-0 Home Nations defeat by Wales, coming in as a late replacement for Sammy Wilson. 21 League goals that season helped Southport to mid-table respectability, and an appearance in the FA Cup third round, where they lost narrowly, 1-0, to top-flight giants, Everton.

In December 1968 Northern Ireland faced Turkey in Istanbul, and Harkin bagged a brace in a 3-0 win. In March 1969 cash-strapped Southport were forced to sell one of their prize assets, Harkin joining struggling Division Three rivals, Shrewsbury Town. His early impact of eight goals in 17 appearances helped drag the Shrews to safety, and come the British Championships (now re-scheduled to the season�s end), Billy Bingham included Harkin in the Northern Ireland squad. He played just once, making his �home� debut as substitute in a 0-0 draw with Wales. The final two caps of Harkin�s international career were won in Moscow and Seville, both games resulting in defeats.

Harkin remained a regular goalscorer for Shrewsbury through to the end of the 1970/71 season, when he moved back to his native Derry, signing with Donegal club, Finn Harps. Harkin helped the Harps to the most successful period in their history, finishing as equal top-scorer in the League of Ireland in 1973 with 20 goals, and claiming an FAI Cup winners� medal the following year (Harps� only ever major trophy win). The club did regularly challenge for the League championship, and competed in Europe on a regular basis, with Harkin�s 82 goals taking him into the club�s top-five all-time goalscorers.

Harkin spent the summer of 1973 playing in the NASL, helping Toronto to the play-offs with five goals and five assists (15 points in MVP terms) in eleven games. He finished his senior career as a 38 year-old with Dundalk.

On this day in 1968 Southport travelled to Billy Bingham's Plymouth Argyle. Since his departure from Haig Avenue in February of the same year this was to be Bingham's biggest defeat. It was the Southport forward line however that took all the headlines as this article from the Liverpool Echo