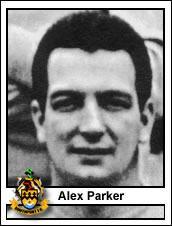 Irvine-born, Parker was playing in the Ayrshire junior league with Kello Rovers while fresh out of school when his form attracted the attention of Falkirk. He had been a centre forward at school, was converted to wing half at Kello, then converted again to a fullback at Brockville. It was as a full-back in the classic mould that he was capped 15 times by Scotland and received 8 Scottish League and six under-23 International caps. He joined Falkirk in August 1952 and in six seasons in the Scottish First Division made 121 appearances. In 1957 he gained a Scottish Cup- winners medal and was elected Scotland's 'Player of the Year'. Alex was transferred to Everton for Ł18,000 and shortly afterwards was posted to Cyprus with the Royal Scots Fusiliers. In a little over seven seasons he made 198 League appearances for 'The Toffees' including 33 in their 1962-63 Championship side. Thoughtful and methodical in style, he placed the ball accurately and almost immediately on joining Southport was made club captain. Though he had lost much of his speed, he was immaculate in his timing of sliding tackles and his experience was invaluable. He played just six games in the Third Division, losing his place through a knee injury; there followed spells either side of the irish border. He returned to Haig avenue as trainer-coach and later manager. After leaving football he became genial 'Mine Host' in Runcorn before moving to the 'Crossways Inn' at Gretna, and quite recently, the 'Coach and Horses' at Kingstown, Carlisle.
Suffering illness at the start of 2009, Parker had to have a leg amputated. The Everton Former Players Association had been planning home improvements to help him, however he died of a heart attack early in 2010.

Sad news today that former player, coach and manager Alex Parker has died aged 74. Parker, the second former Sandgrounder to pass away within a week, was largely regarded as one of the best full backs the club has ever had. ALEX PARKER The Independent (London); Jan 23, 2010; Ivan Ponting; p.