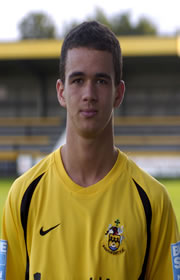 A product of the clubs Soccer Education Scheme, Zac's potential was spotted early and was very quickly signed on a first team contract. After completing his relevant qualifications, and even qualifying as a referee, Zac broke into the first team squad where his speed and his long throw proved a contant danger for visiting defences when introduced from the bench.
Signed an 18 month deal with Blackburn Rovers mid-way through the 2009-2010 season, following a successful trial.