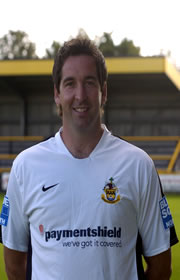 Smart began his career with junior club Balbeggie and had spells with St Johnstone and Brechin City, but without appearing for either's first team. In 1993 he joined Highland League club Caledonian; the following year Smart made his Scottish League debut following the merger which created Caledonian Thistle, but was soon sold to Preston North End for a fee of Ł15000. Here he was sent out on loan to a number of clubs in order to gain experience and match practice. These clubs included Carlisle United and Northampton Town. In between these loan deals he also managed to make some first team appearances for Preston. However, after just thirty-one appearances for the club he was signed permanently by Carlisle in 1996 and then moved on to Watford for Ł100,000 in 1998.

During his time at Watford he helped them get promoted to the Premier League for the 1999-00 season. He scored the second goal in Watford's 2-0 victory against Bolton (division one playoff final)[1]. This ensured Watford's promotion was concrete. Soon after, Watford found themselves out of their depth in the division as they finished 20th with just 24 points. However Smart still managed to score some goals. He stayed with the club until November 2001, after two loan moves to Hibernian and Stoke City respectively. He signed for Oldham Athletic for a fee of Ł225,000 on 30 November 2001.

His time at Oldham was both frustrating and disappointing for Smart, as he managed just twenty-one appearances during his season-long stay at the club, before being released at the end of the season. Since leaving Oldham in 2002, he had spells at Dundee United, Crewe Alexandra, MK Dons and Bury before signing for Portadown in the close season of 2006.

In July 2007, Smart joined Conference North side Burscough on a season-long loan. When the loan deal expired, Smart made the move permanent as his Portadown contract had also expired.

After the departure of manager, Liam Watson, from Burscough, his assistant, Joey Dunn was appointed as his replacement and Allan was appointed Head of Youth Development.

Published Date: 18 February 2008 Before leaving former Preston North End star Allan Smart's Lostock Hall home I stopped to admire a giant, framed colour print of Watford at Wembley Stadium, and asked him about the photograph. Far in the distance, a yellow-shirted figure has fired a shot low into the bottom