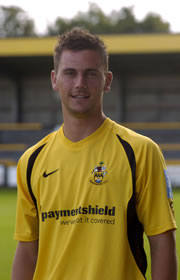 Rob had two spells with Vauxhall Motors witha short spell at Leigh Genesis between them. He was originally signed from Chester City in 2007 where he was a product of their youth team having made 31 appearances and scoring 4 goals during the 2005-06 campaign. He was originally a forward but was converted to centre back however he retains his attack ethos. Rob has also gained experience at Wrexham and Manchester United.