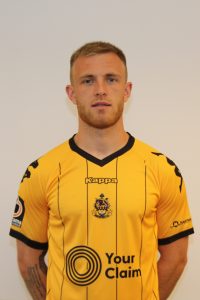 The club captain David has been a part of the Southport midfield since 2017. The former Northern Ireland youth midfielder has played for nine clubs despite only being 24.

He started his senior career with Nottingham Forest , being sent out on loan to three different clubs in his two years at the club.  After leaving the City Ground, Morgan enjoyed spells with Ilkeston, Nuneaton, Fylde and Harrogate. He made three appearances for the latter before joining Southport.