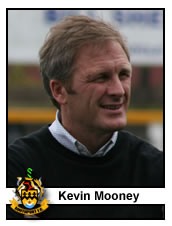 Kevin Paul William Mooney has had a varied football career since first playing for Tranmere as a 16 year-old in 1975. At 18 he moved to Bangor City and after half a season was sold to Bury for £6,500, more expensive than another arrival at Gigg Lane at that time, one Neville Southall!
After a year-and-a-half he spent a season in Sweden playing for Karskrona and after arriving back in the UK he played for Telford, Tranmere and Stafford Rangers.
Four years with the Midlands club were followed by another four, at Bangor City – and he admits it was hard to pull himself away from the North Wales club where, he said, the atmosphere and team spirit was tremendous. Kevin is quick to point out that team spirit is one of the most vital ingredients in football, and his time at Bangor has only been bettered by that at Haig Avenue.
He goes as far as to say that he feels the Haig Avenue team spirit in the 1992/93 season was one, if not the main, contributing factor to the club’s success. Kevin admits that despite the tremendous success of the side in the title-winning season, he was never certain that Southport would win the league – not until the final whistle blew at Emley! He said: “That was because the league was contested by two exceptional sides during the season, ourselves and Winsford. The real turning point in our season was the fabulous away win at Winsford just before Christmas. An away win over our main rivals was always going to be vital, and the way the defence performed that day did everyone proud.
“We just had to take it game by game, but I spent a lot of time studying the league table in the programme checking who still had to play whom, and working out the maximum number of points teams could get.”
There is no doubt about it, Kevin’s cool defending and marshalling of the back line played a major part in the Championship success and a tribute to him is shown by the fact that supporters and players alike voted him as their Player of the Year. Kevin names good on and off the field friend Derek Goulding as a big influence on his playing career, but also names his mum and his wife as the big inspirations in his life.
Kevin wore the number 4 shirt for all of Southport’s 68 competitive matches in the 1992/93 season missing just a few minutes of the complete season due to injury in the final game.
Kevin made 132 appearances in total scoring the two league goals one, a 45 yarder at Barrow that sailed over the goalkeepers head. 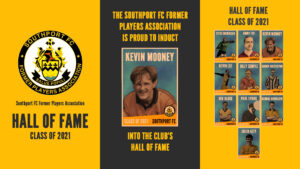