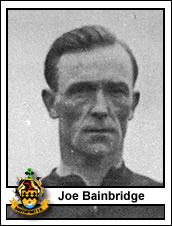 If you can provide any further information please contact me
Season: 1922/1923 [Back to Player Stats]
The player made an appearance in the following games: