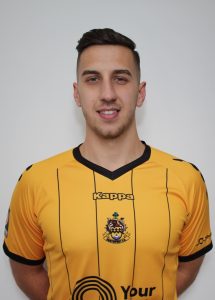 Charlie spent ten years in the Manchester City Academy before signing for the Port in Mid November 2019.

Naturally a central defender, Oliver progressed through the ranks at City, turning professional at the age of 18. He became a regular for their Elite Development Squad, representing the club in PL2 and the EFL Trophy.

The Manchester-born player also helped City to the 2016 FA Youth Cup final, spending the second half of the 2017/18 season on loan at Fleetwood Town and the start of the following season with Brentford B.

Season: 2019/2020 [Back to Player Stats]
The player made an appearance in the following games: