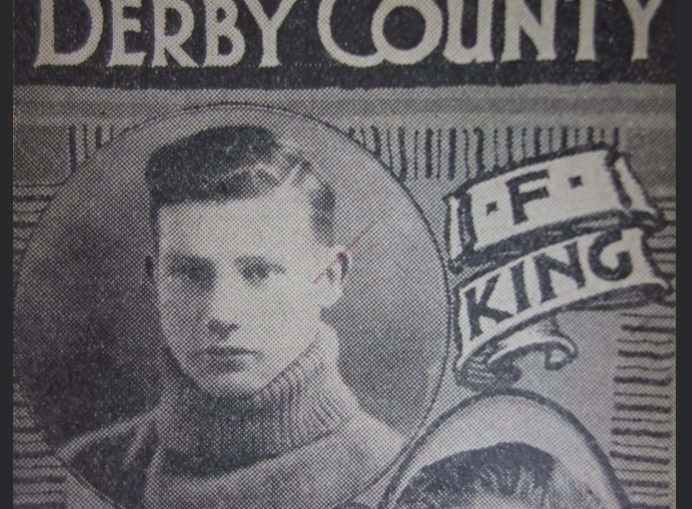 This article has been reproduced with permission from the excellent Blyth Spirit blog at https://blythspirit.wordpress.com/

The eldest of three brothers, George & Ray, his father was a miner at Radcliffe colliery.
Aged only nine they were evicted from their colliery house after his father was suspected of instigating a miners strike.
His parents then briefly attempted to run a chip shop but had to give up the business when ten year old Frank accidentally burnt down the house!
They moved to Amble when his father secured a new job as a check weigh man at Hauxley Colliery.

Frank started playing football aged 14 for Radcliffe. He was given his first team debut in 1931 when Radcliffe drew local rivals Hauxley in a North Northumberland Cup tie.
Despite losing 0-1 Frank was the star player for Radcliffe, undeterred at being younger than his opponents the red haired keeper soon gained a reputation of having no fear.

It was Blyth’s first official manager, Ernie Hoffman, that brought 16 year old Frank to Croft Park. Signing him from Amble with the intention of playing him in the Reserves to develop.
However the FA Cup changed all that.

The Spartans had drawn 1-1 away at Wardley Welfare in a 3rd Qualifying Round tie on Saturday 28th October, four days later the replay at Croft Park ended 2-2 after extra time.
Blyth then played Darlington Reserves away on Saturday 4th November in a North Eastern League game.
Albert Dunmore scored the goal in a great 1-0 win but Blyth suffered a blow when regular keeper Jim Barron picked up an injury.

The injury ruled him out of the FA Cup 2nd Replay two days later, Ernie Hoffman had every confidence in his “strongly built” stand in keeper.
On Monday 6th November Blyth finally overcame Wardley Welfare 1-0 thanks to another Dumore winner to set up a 4th Qual. tie with local NEL rivals North Shields.
However was it Frank’s ‘miraculous’ performance that took all the plaudits, the Blyth News dubbed him the “brilliant boy keeper”.

He kept his place for the North Shields tie at Croft Park and produced another superb display as the tie ended 0-0.
The 1-1 league draw away at Sunderland Reserves on Saturday 18th November saw him concede his first goal in three appearances, however word about the “brilliant boy keeper’ had got out.
On Monday 20th November Frank played in the FA Cup 4th Qual. Replay, a game that changed his life.
Blyth lost 1-3 but once again Frank was the star man despite the the scoreline, the display of the 16 year old impressed the watching scouts.
Straight after the game at Appleby Park, First Division Everton made their move and approached the club about signing Frank.

On Wednesday 22nd November Frank officially signed for the Toffees.
Due to his age he was classed as an ‘amateur signing’ and a nominal fee of £200 was agreed between the clubs.

He spent a year in the youth and reserves teams before featuring in the clubs annual Intra-Squad Blues v Whites pre season friendlies.
On 13th August 1934 he played for the ‘Whites’ in the 4-4 draw where he came up against club legend Dixie Dean. Five days later his Whites team won the return 7-4.

Remarkably he was handed his first team debut on his 17th birthday!
He debuted in the 1-1 draw against Middlesbrough at Goodison, going on to make four more appearances that season keeping three clean sheets in those five games.

From 1933/34 season onwards he was established as the stand in for regular keeper Ted Sagar. On 4th January 1936, aged only 19 he was thrown into the white hot atmosphere of a Merseyside derby.
With Sagar injured Frank stepped in and produced a man of the match performance in front of 52,282 in a 0-0 draw.
An avid Sunderland supporter it had been Frank’s dream to one day play for the Black Cats. On 6th February 1937 he finally got to play against the team he supported. He kept a clean sheet as a Dixie Dean brace helped to the Toffees to an easy 3-0 victory.

Frank only managed to play 13 times keeping an impressive 8 clean sheets. He couldn’t oust regular keeper Ted Sagar who would go on to make 500 appearances.
Frank felt he needed to be playing regularly he meet with the management to express his concerns and as a result on 8th May 1937 he was allowed to join Derby County for £200.

It was seen as a shrewd signing by the Rams.
But with three other keepers already on their books his task of getting regular games was no easier.
He featured in the final three games of 1937/38 season, the last first team league game he played for the Rams happened to be back at Goodison Park on 7th May 1938 in a 1-1 draw.
A bad injury picked up in a Reserve team game against Stoke City in January 1939 led to him having to retire aged only 22.

Unable to play professionally anymore Frank embarked on a career in the police force, he did however manage to return to playing three years later.
When war broke out in September 1939 as a serving police officer he was excluded from the war effort and made a return to football. He signed for Southport as a ‘guest player’ and played in the Wartime League.

Between 1941/42 and 43/44 Frank made 23 appearances while still serving as a policeman. Having been out the game for over two years, his return wasn’t as successful.
His debut on 13th December 1941 didn’t quiet go to plan as Southport lost 1-6 away at Bury.
He failed to kept a clean sheet and conceded 62 goals in those 23 appearances, playing 13 times in Wartime League and 10 times in the Football League War Cup.
His last ever appearance at Goodison Park as a player wasn’t quite as he would have wanted, Southport lost 2-10 on 22nd February 1943 in a Football League War Cup Qualifying tie.

Frank’s final game as a player came on 18th September 1943 in Southport’s 4-4 home draw with Rochdale. However that wasn’t his last involvement in the game.
While still a serving policeman he took a course in physiotherapy and upon qualifying he quit the force and took up the roll of physio at Leicester City.

In 1958 he accepted on offer to move to Luton Town to be their trainer. He was part of their infamous ‘selection team’ when the club reached Wembley for the first time in 1959.

In October 58 Dally Duncan left Kenilworth Road to join Blackburn after ten years in charge. Town’s board formed a ‘selection team’ to run footballing side of the club.
Three directors, trainer Frank along with help from long serving captain Syd Owen choose the team, it worked as The Hatters reached their first major Final.

They used the same 11 players in the nine games to reach Wembley.
The 78th FA Cup Final was a case of what could have been for the Hatters.
The directors  within the selection team over ruled Frank & Owen and bizarrely decided to change a winning team. They left out top goalscorer Gordon Tuner and winger Jim Adam. The Hatters found themselves 0-2 down after 14 minutes, in the second half even when Forest went to down to 10 men through injury they couldn’t capitalise. They did pull a goal back but Forest held on to lift the cup.
That Final was as good as it got for the Hatters and the following season they were relegated from the First Division and by the start of 64/65 were playing in the fourth tier.

By then Frank had taken up a position as a physio for the FA and served them for several years in various posts before retiring and living out his days in Bedforshire.

The late Ken Sproat‘s superb book ‘The History of Blyth Spartans’ was as ever an important source of information.

– Provided a great old image of Frank in his Luton days.