As a third article on the theme of Football League election the Manchester Guardian archives have thrown to light some interesting articles documenting meetings surrounding the clubs entry to the Football League.

In 1911 Barnsley were successful in their re-election to Football League Division Two (28 votes) with Grimsby Town (18 votes)being elected in place of the unsuccessful Lincoln City(17 votes). 4 other clubs, Darlington, Chesterfield Town, Hartlepools United and Rochdale shared the remaining 15 votes between them. After the AGM, the five unsuccesful clubs met and decided to ask the Football League to reconsider the idea of a Third Division. This was backed by 34 of the 40 League clubs. The Football League advertised for new clubs stating that there would need to be a minimum of sixteen teams and that these clubs would not be given a vote at AGMs, except in the election of new clubs.

The first article, published on 18th June 1911, speaks of the first meeting. Applications were eventually received from twenty clubs – the five previously mentioned plus Port Vale, Rotherham Town, Crewe Alexandra, Walsall, Burton Town, Macclesfield, St Helen’s Town, South Liverpool, Southport Central, South Shields Adelaide, Croydon Common, Portsmouth, Southend United, Cardiff City and Merthyr Town. When the proposal to form a Third Division with these Clubs was put to the League members, they rejected it 26-11. It would be another 10 years before the idea ever got off the ground!

The next article, published almost ten years later, on 7th January 1921, discusses the likelihood of the northern section going ahead and that it all infact hinged upon our own Edwin Clayton applying in writing on behalf of the 27 clubs, to the secretary of the Football League. 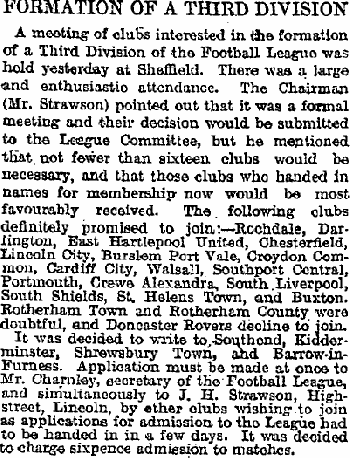 As history tells us, the formation of the Third Division North did get the go-ahead. The following article confirms the clubs elected to the central league to fill the vacancies left by the six clubs joining the football league.

The following is the same newspapers account of the first games from the new league.